There are numerous Samsung Galaxy S10 features that can take the whole user experience to a whole new level. However, not all the users are aware about them. Also, some of the features are pretty unique. They are not available on the iPhones. In this article, you will find 10 of the standout features of Samsung’s flagship smartphone. By knowing them, you can make the most out of your device effectively. Now, let’s dive in.

Scene Optimizer is one of the most buzzing Samsung Galaxy S10 features. It enables the device to detect up to 30 scenes, including Food, Landscapes and Mountains, and adjust the settings accordingly. When the shooter recognizes any scene, the color will be optimized automatically. In this way, the feature enhances the effects and the quality of your images. To turn it on, you have to go through these steps: 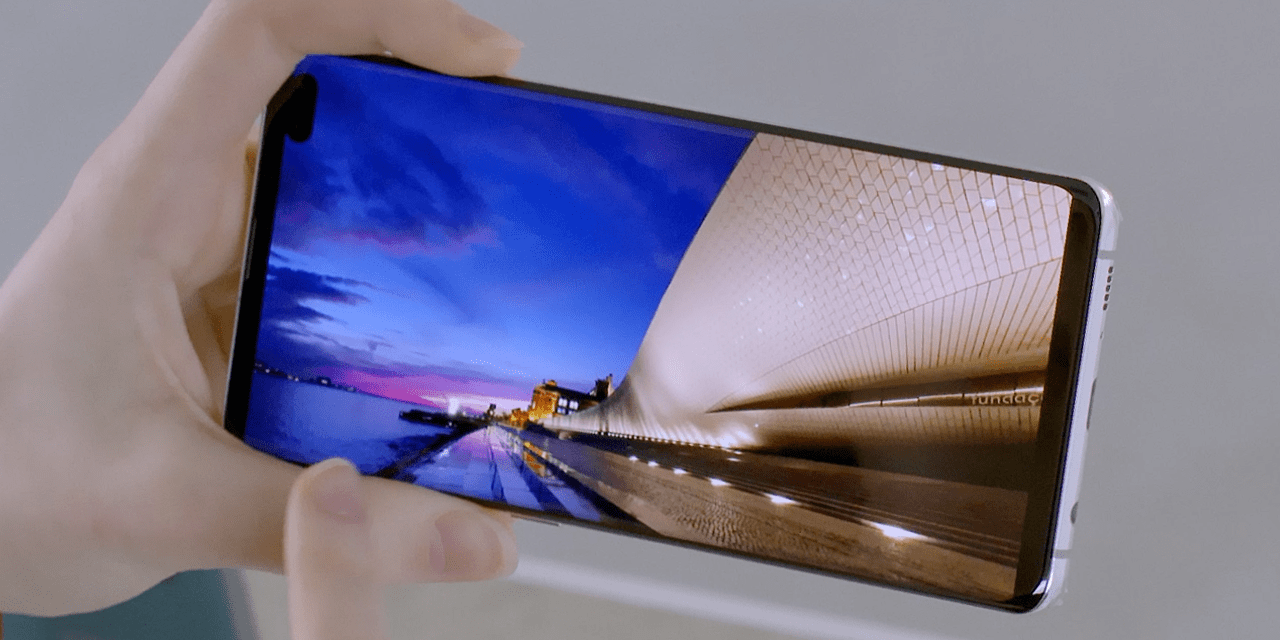 One of the most groundbreaking Samsung Galaxy S10 features is the phone’s ability to predict the app that you are going to use. The device utilizes AI to learn your app usage habit. More specifically, it will know which apps you typically use at a specific time of the day. The technology preloads them in the background so they load faster. Also, it shuts down the apps that you usually closes before lunchtime or bedtime. In this way, it can save a significant amount of resources and battery life.

You might have been in a situation where all of your devices run out of juice while you forget to bring their chargers during travelling. Wouldn’t would be nice to get an all-in-one solution? In this case, Galaxy S10 comes into play. It features the new Wireless PowerShare option, allowing you to share the power of your Galaxy S10 with all of your devices on the fly. All you need to do is to place the two devices together. It works with all of the Qi-certified phones and smartwatches. It even works with the iPhone XS! Overall, the PowerShare feature transforms the Galaxy S10 into a highly effective wireless charger. To use it, you will have to follow these steps:

If the charge of your Galaxy S10 falls below 30%, the Wireless PowerShare feature shuts off automatically.

Always on display is a pretty common feature in the flagship phones. It allows you to take a quick look at the notifications and messages. However, it’s a bit unique in Galaxy S10. Unlike the other premium phones, you can prevent the display from staying on all the time. There is a way for scheduling its time to light up. Follow these steps:

From now on, Always on display will work only at your scheduled time. If you feel that it is a bit bright at night, the feature can be really useful for you.

It has been several years since Samsung introduced wireless charging in its Galaxy flagship phone. While the technology sounds really enthusiastic, it was heavily criticized for significantly sluggish performance. However, this time, Samsung has come with a solid solution with the Fast Wireless Charging 2.0. Introduced with the Galaxy S10, the technology utilizes the 12W wireless charging to top up your phone at a significantly faster pace. With Samsung’s wired charging still at 15W, the new system is able to deliver almost the same charging speed when you plug in the Galaxy S10. 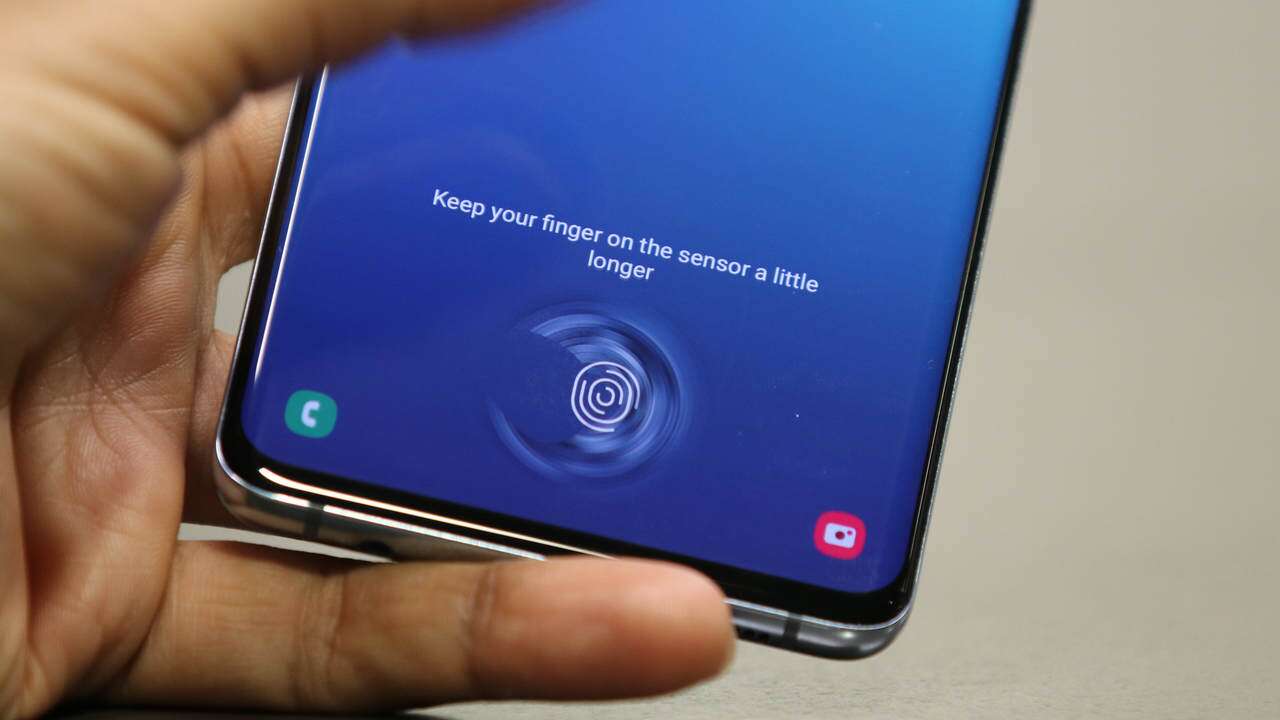 The Galaxy S10 features a new fingerprint sensor. It is built right under the screen. So, it doesn’t take up extra space like the predecessor. The new component utilizes ultrasonic technology for reading the ridges of your fingerprint. Also, it works even though the display is turned off or in low power mode. Moreover, the technology detects your print even if your finger is wet. In addition, the fingerprint sensor is more secure than ever before. Thanks to the 3D anti-spoofing technology, which prevents unwanted people from making payments and authentication. 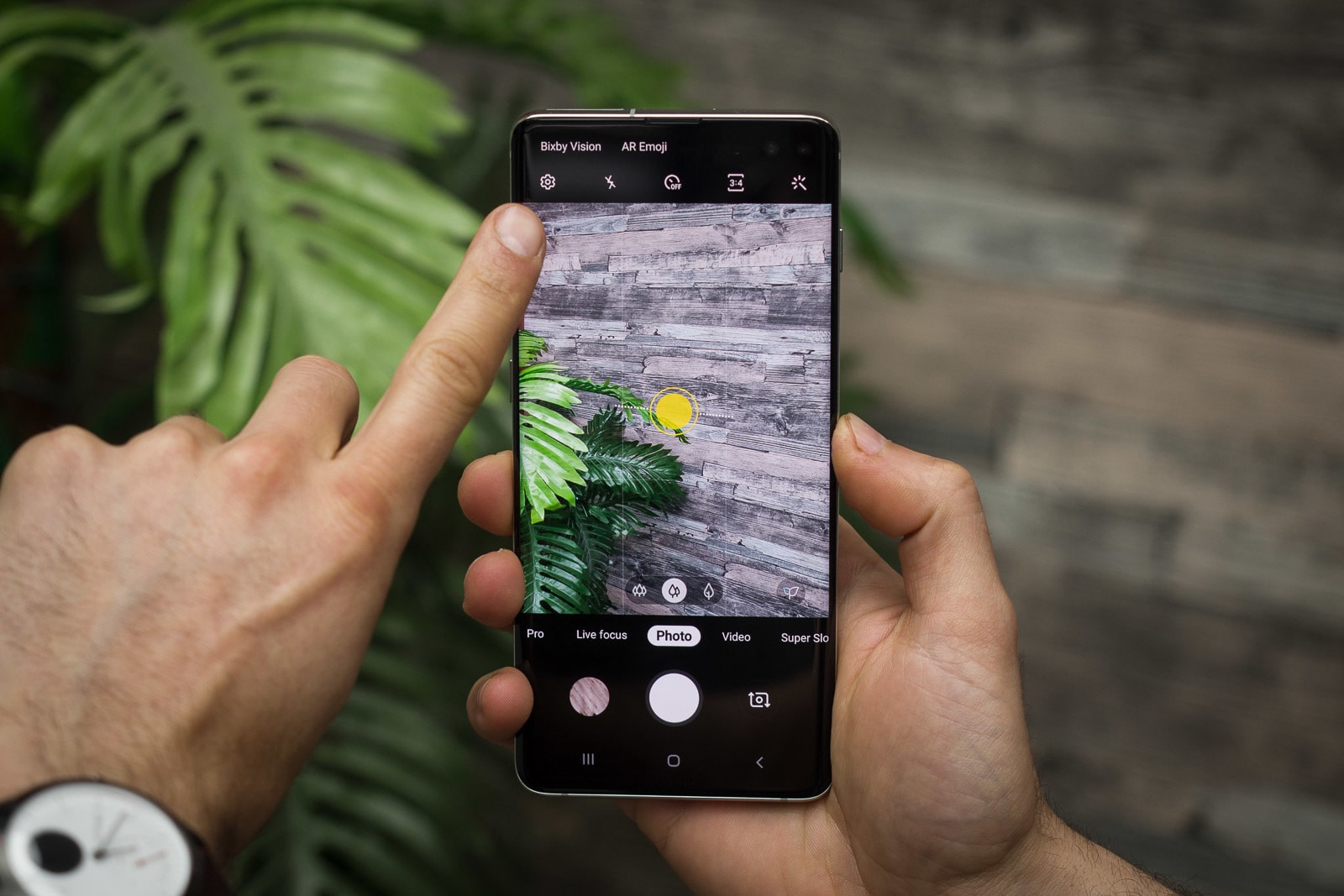 Create GIF on the Fly

One of the coolest Samsung Galaxy S10 features is the ability to create GIFs on the fly by using the shutter button. The image quality is not outstanding. But still, it offers a lot of convenience. To enjoy his feature, you just need to follow these steps:

Now, when you press and hold the shutter button, a short GIF will be created right away.

Samsung Galaxy S10 has the world’s best smartphone screen. Thanks to the inclusion of the Dynamic AMOLED technology. In fact, it’s the very first mobile screen to feature the system. Apart from producing a more stunning view than ever before, it reduces harmful blue light without changing the on-screen color. The technology keeps the display color same while offering all the benefits of Night Mode. Most of the people don’t notice it. Nonetheless, Dynamic AMOLED Display is one of those unique Samsung Galaxy S10 features that makes it one of the top phones to buy right now. 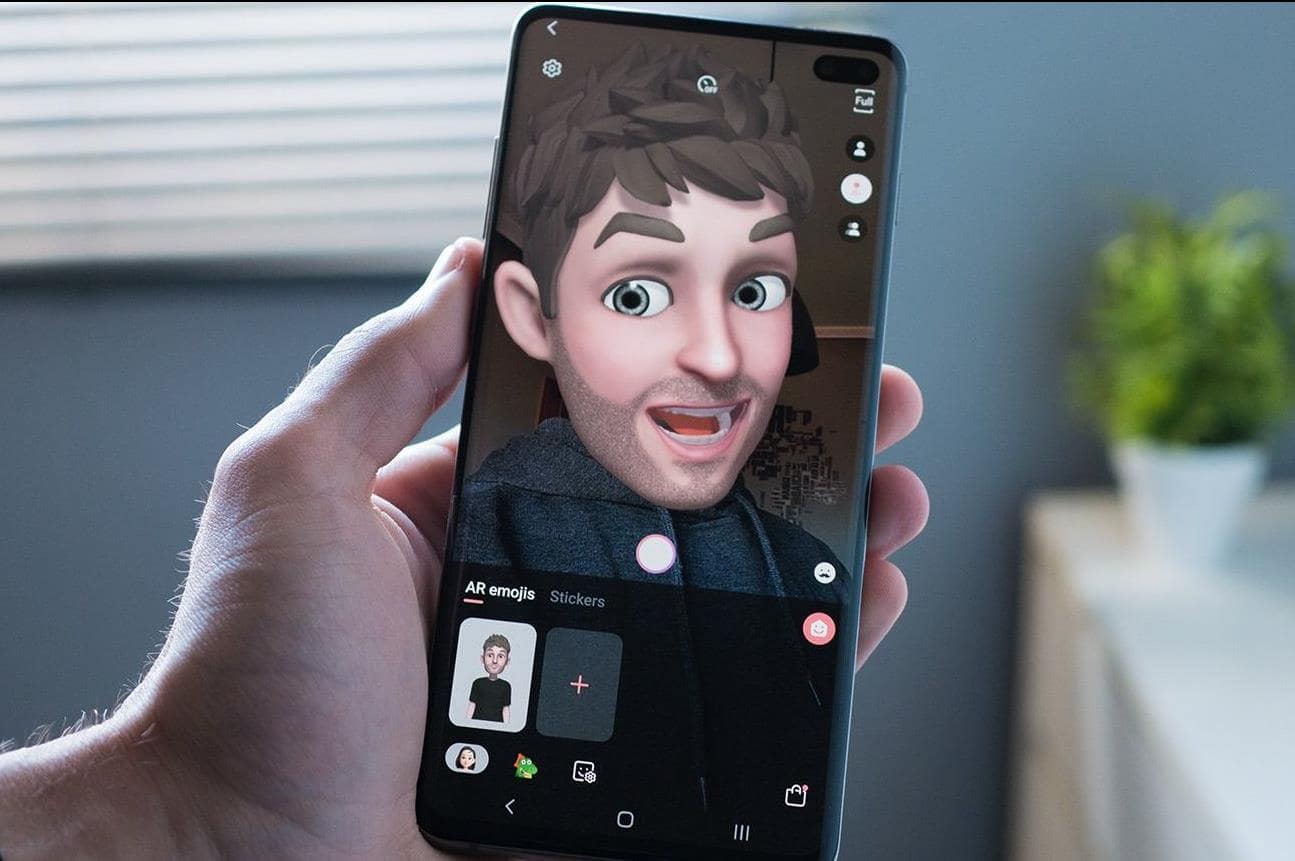 Turn Your Face into a Lifelike Emoji

Finally, Apple’s Animoji gets some serious competition with the Galaxy S10’s 3D AR Emoji 2.0. The technology utilizes the cameras to transform your face into a lifelike emoji. You can move the head of the created emoji in your preferred direction. But more interestingly, it can speak just like the way you do. Also, it can mimic your actions, giving you a taste of your lifelike emoji in an amazing way. Whether you are laughing or making weird faces, the technology records all of your actions brilliantly. Moreover, it supports tons of customization. By using AR Emoji’s editing tab, you can change the hairstyle, clothing and accessories of the emoji. Overall, the AR Emoji 2.0 is one of the most enjoyable Samsung Galaxy S10 features. 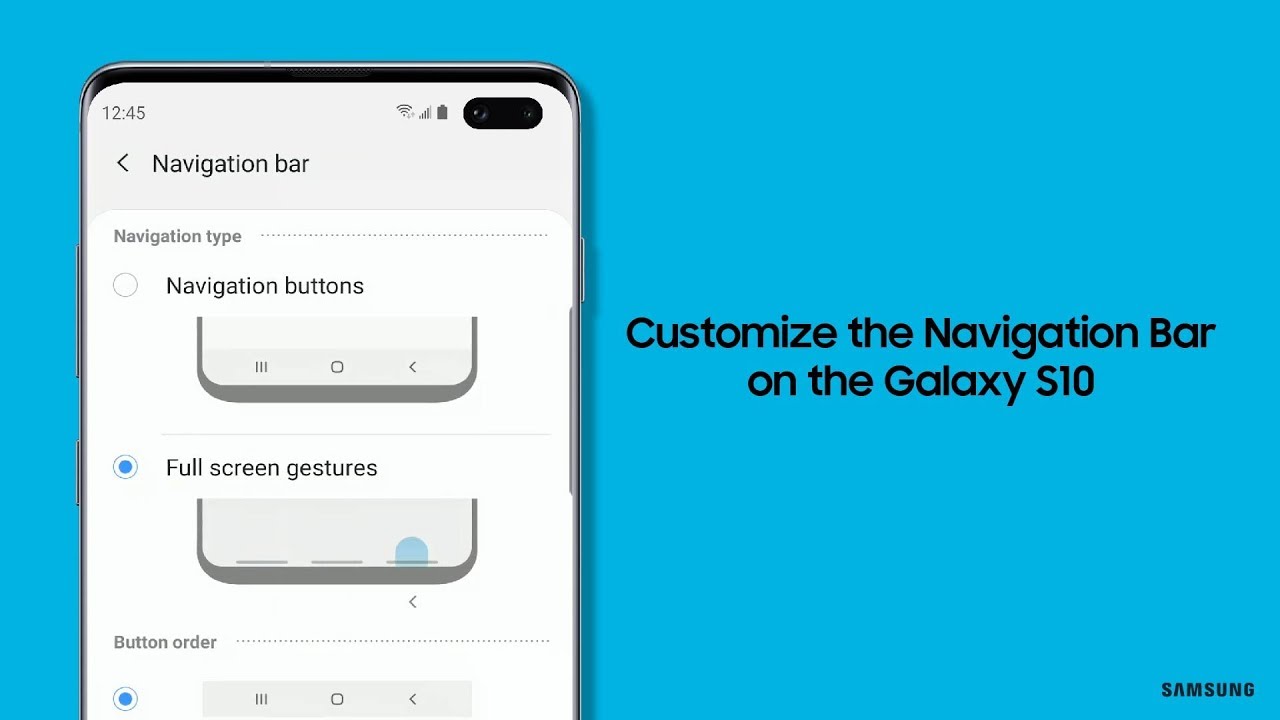 If you don’t like to use the traditional navigation buttons, there is a great alternative for you. It’s called Navigation Gestures, which is one of the best Samsung Galaxy S10 features. When turned on, the feature make the icons for Home, Back and App Switcher disappear. While it might become a bit confusing for the beginners, using Navigation Gestures is really easy to learn and use. To go back, simply swipe up from the bottom of the screen where the Back button used to be. Swiping up from the middle at the bottom of the display will take you to the Home screen. To open the app switcher, swipe up from the bottom right of the screen. However, before enjoying the navigation gestures on Galaxy S10, you will have to go through these steps:

That’s it! You have successfully switched to Navigation Gestures.

Check out some cool Samsung Galaxy S10 tips and tricks

This is the end of the article. We will publish more articles on Samsung Galaxy S10 features. So, do not forget to check our website regularly.